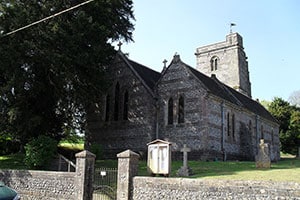 In 1086 in the Domesday Book Turnworth was recorded as Torneworde. It had 19 households, was in Pimperne Hundred and the lord and tenant-in-chief was Alfred of ‘Spain’.

The church, with the exception of the tower, was rebuilt in the 19th century with assistance from Thomas Hardy, who designed the capitals and possibly also the corbels. Hardy described Turnworth’s position as being “stood in a hole, but the hole is full of beauty”, and he used Turnworth House as the inspiration for Hintock House in his novel The Woodlanders.
The carved stone foliage for the church’s pillars were designed by Thomas Hardy (although the work was done later).

The west tower is c. 1500, of greensand and flint, but the rest was rebuilt in 1868-69 by G. R. Crickmay to a design of John Hicks, after his death. The ornately carved capitals were reputedly designed by Thomas Hardy, who worked for both Hicks and Crickmay before he became a well-known poet and novelist. The ‘capitals’ represent various kinds of foliage inhabited by song birds (including a very striking owl) and sand lizards.
In later life, Hardy was well acquainted with the Rector (Thomas Perkins, a regular contributor of guidebooks to Bell’s Cathedral Series) and apparently used to cycle over from Dorchester to read the lesson at evensong.